Just back from Egypt this is our report of the autumn season! We have successfully accomplished the following tasks:

Members of the team working in October and November 2018 were: 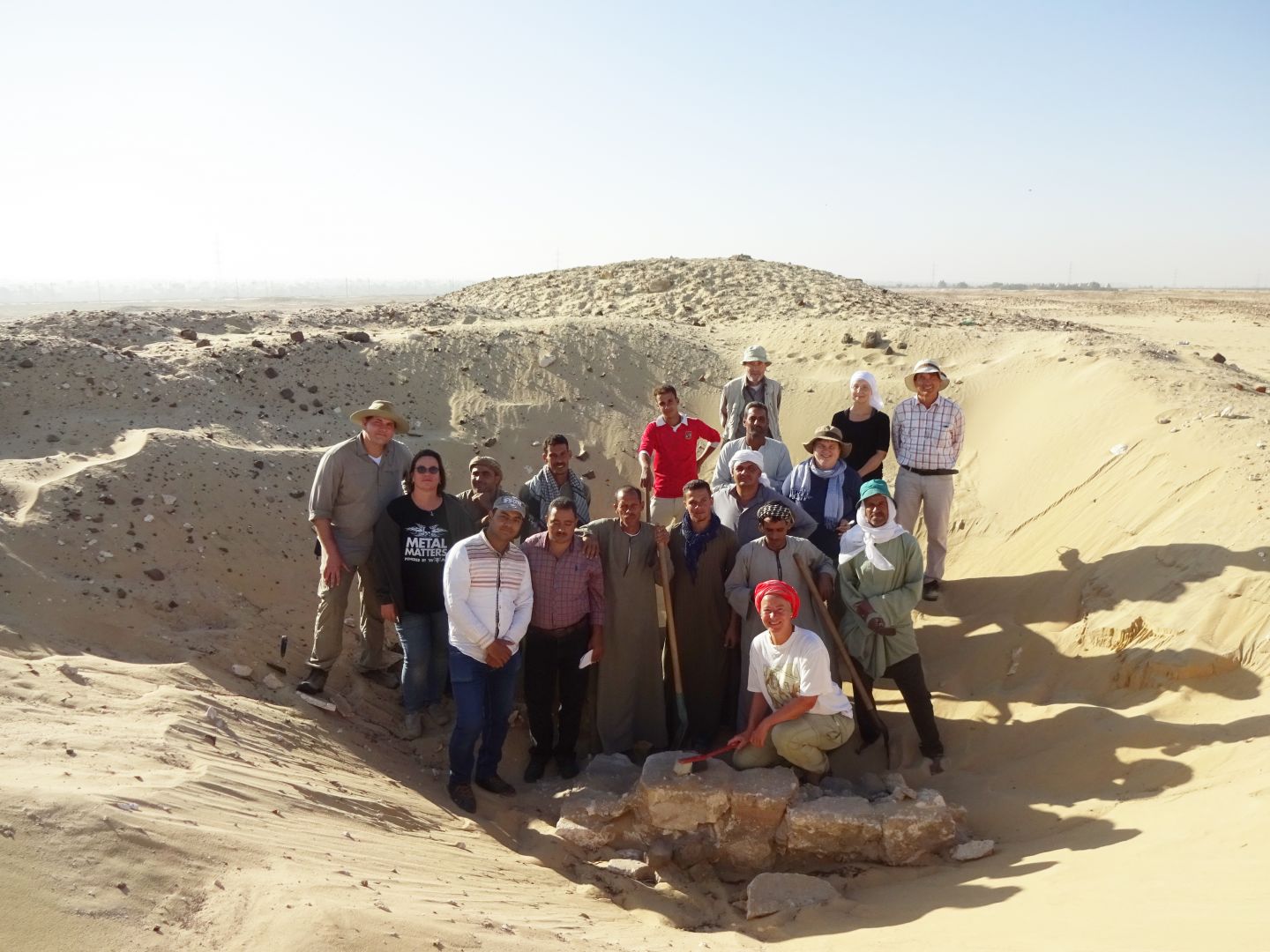 A large area of the necropolis of Tuna-el-Gebel is covered by sand. GPR (Ground-penetrating-radar)-measurements are used to map building structures and distinguish tombs from living quarters. The measurements were done to improve results from previous campaigns by a new digital dual-frequency antenna. This antenna measures at two frequencies simultaneously which produces a higher resolution in the near-surface area with the higher-frequency antenna while allowing also a greater depth penetration with the lower-frequency antenna. Furthermore, new information of areas where no measurements were done before was collected.

GPR-measurements are based on electromagnetic waves which are emitted and received by an antenna that is pulled above the ground. Emitted waves get reflected at material boundaries like stone walls. By measuring the time of the travelling waves the depth of the reflecting structures can be calculated. Furthermore we created several velocity profiles in order to calculate the reliable depths of structures.

First processing and calculation of timeslices were done in the field to check for quality. Further processing will continue after the campaign. 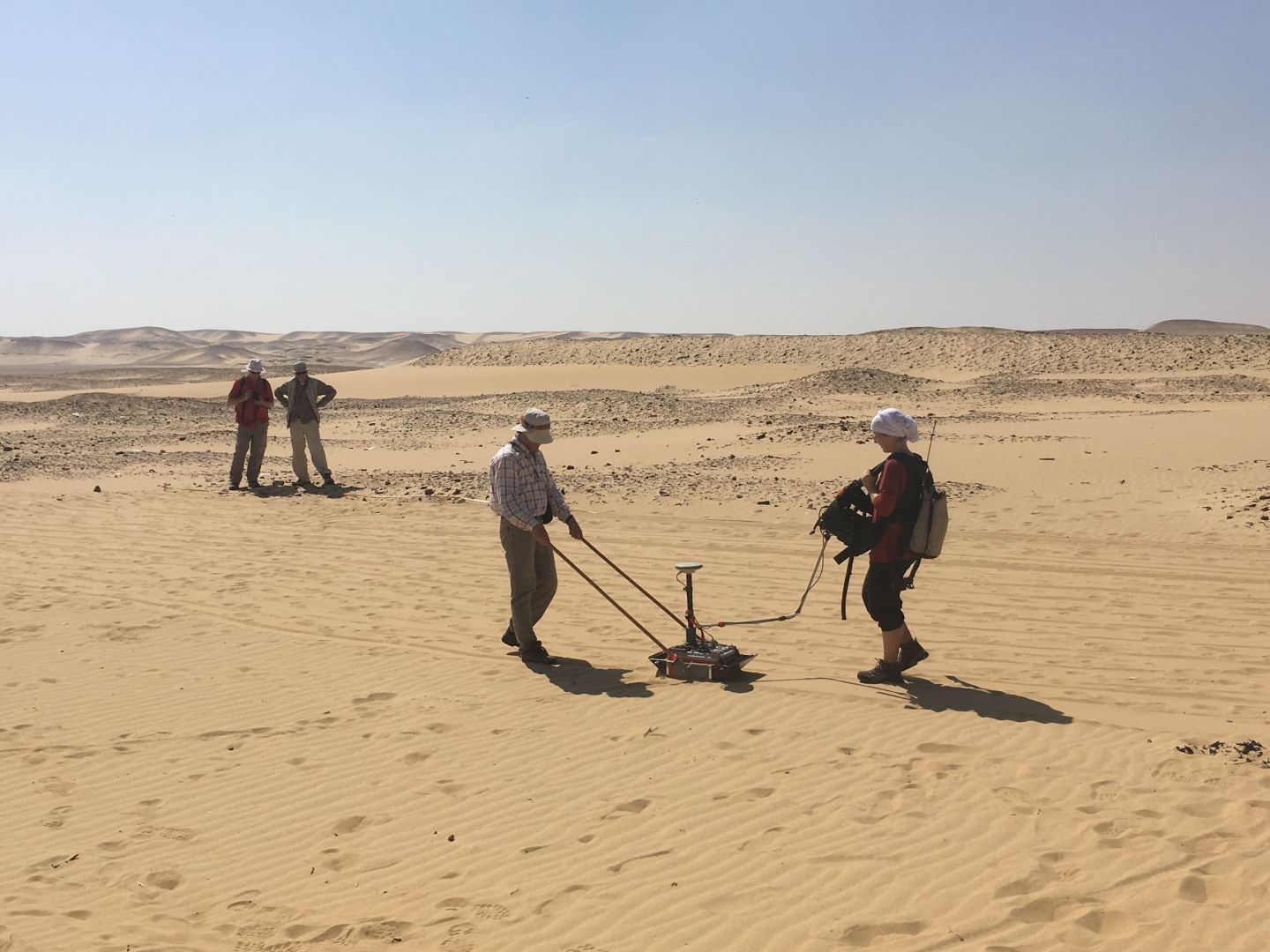 After starting our excavation in spring 2018 in an area south of the tombs excavated by Sami Gabra we began in this season with the excavation of a stone building located west of the previous area.

In the autumn campaign of 2009 the geomagnetic prospection with georadar (GPR) in area R3/09 showed a cluster of mudbrick houses in the west and, according to high black amplitudes, a stone building in the east of the area being the southernmost stone building known in the necropolis so far. Therefore we started our work here to learn more about the layout and function of this building. After discovering that the walls of GB 71 were covered by more than 150 cm of sand, we decided to clean and document only a part of the wall running from east to west. Further work to clean this building from sand was abandoned for the time being as the effort would need an extensive period of time for excavation as well as many workers.

More promising was a tomb house south of the street bypassing GB 1-5 (Gabra´s nos. M 12/SS and M 13/SS) that we started to excavate during the second week of our season. Soon we learned that this house has a complex structure and is by far the largest mudbrick tomb excavated in Tuna el-Gebel so far!

The building covers an area south of GB 5 (not numbered by Gabra). While the façade opens to one of the main roads leading from the fertile land into the cemetery, its eastern wall follows the line of a smaller pathway from north to south. The building consists of at least seven rooms that we excavated during this season. Highly interesting was also the courtyard in front of the tomb´s entrance where we discovered several installations for the worship of ancestors.

Like in other tombs an altar was located in front of the main door. Furthermore, we discovered a sloping platform for visitors to rest, a place for eating and drinking as well as many small pottery sherds lying beside the altar. In the first room of the tomb house two niches were used for the cultic worship. A small room in the north-eastern edge of the building was probably used as the burial place of the mummies. A staircase further to the south lead to a second floor of which almost nothing is preserved. As the façade was slightly inclined and covered with imitations of large stones in stucco, this building certainly belongs to the oldest mudbrick tombs of the necropolis.

During the last days of our excavation we discovered another door in the southernmost part of the western wall. As the western part of the tomb was probably not accessible from the northern door, this secondary entrance may have served for these rooms not excavated so far. 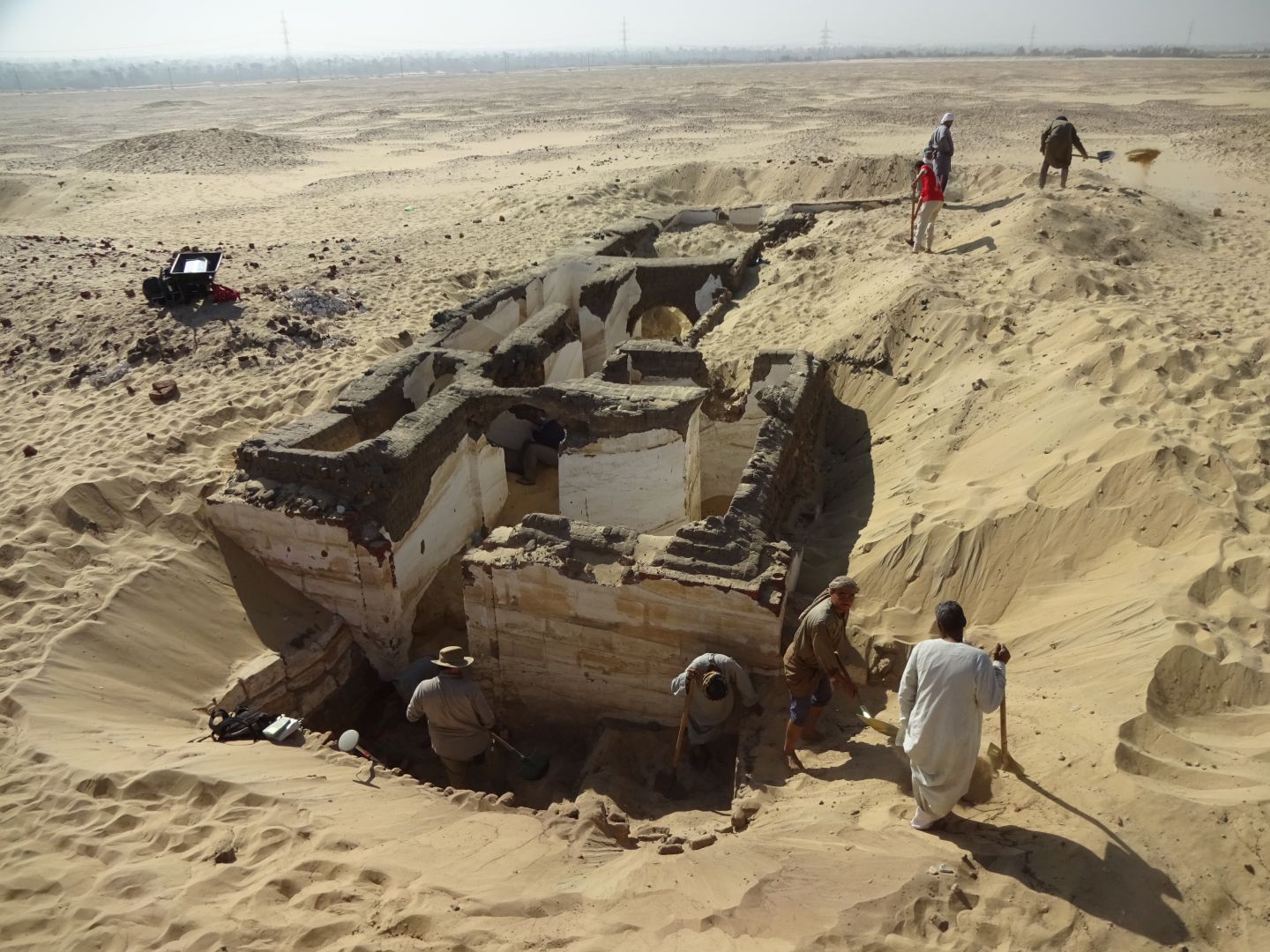 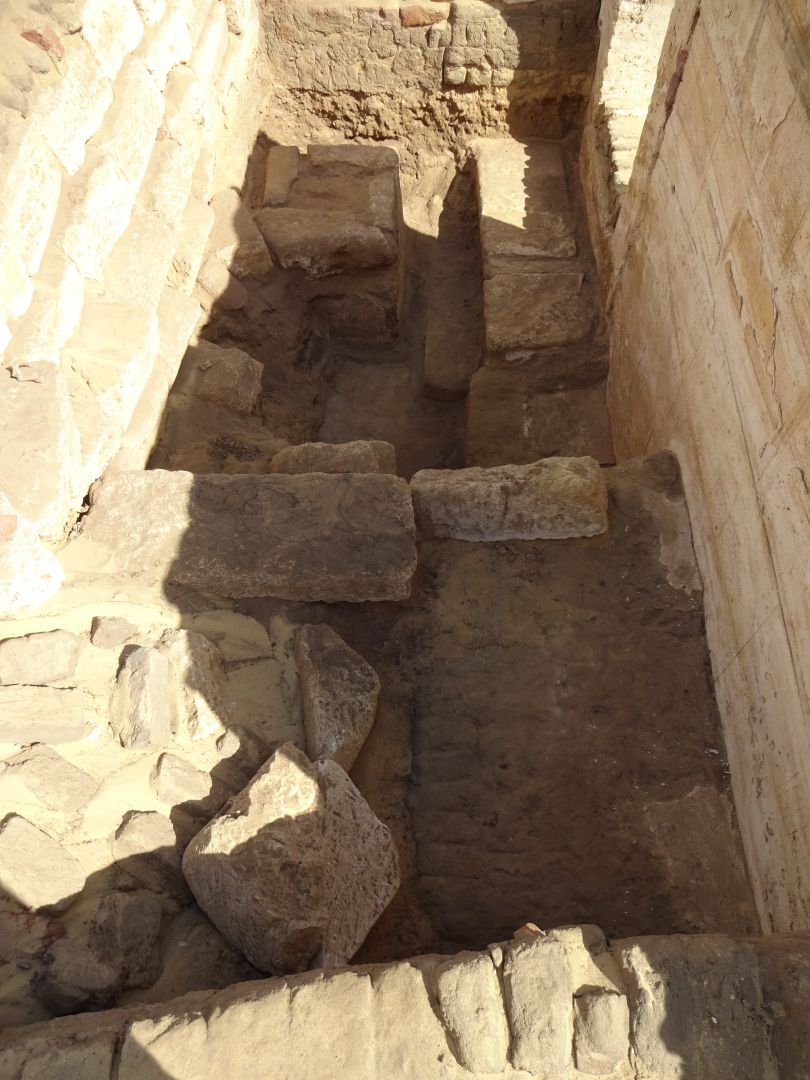 Some of the tombs excavated by Sami Gabra have been opened by force in June 2018. In this season, Friederike Funke studied and documented the state of the condition of the wall paintings. 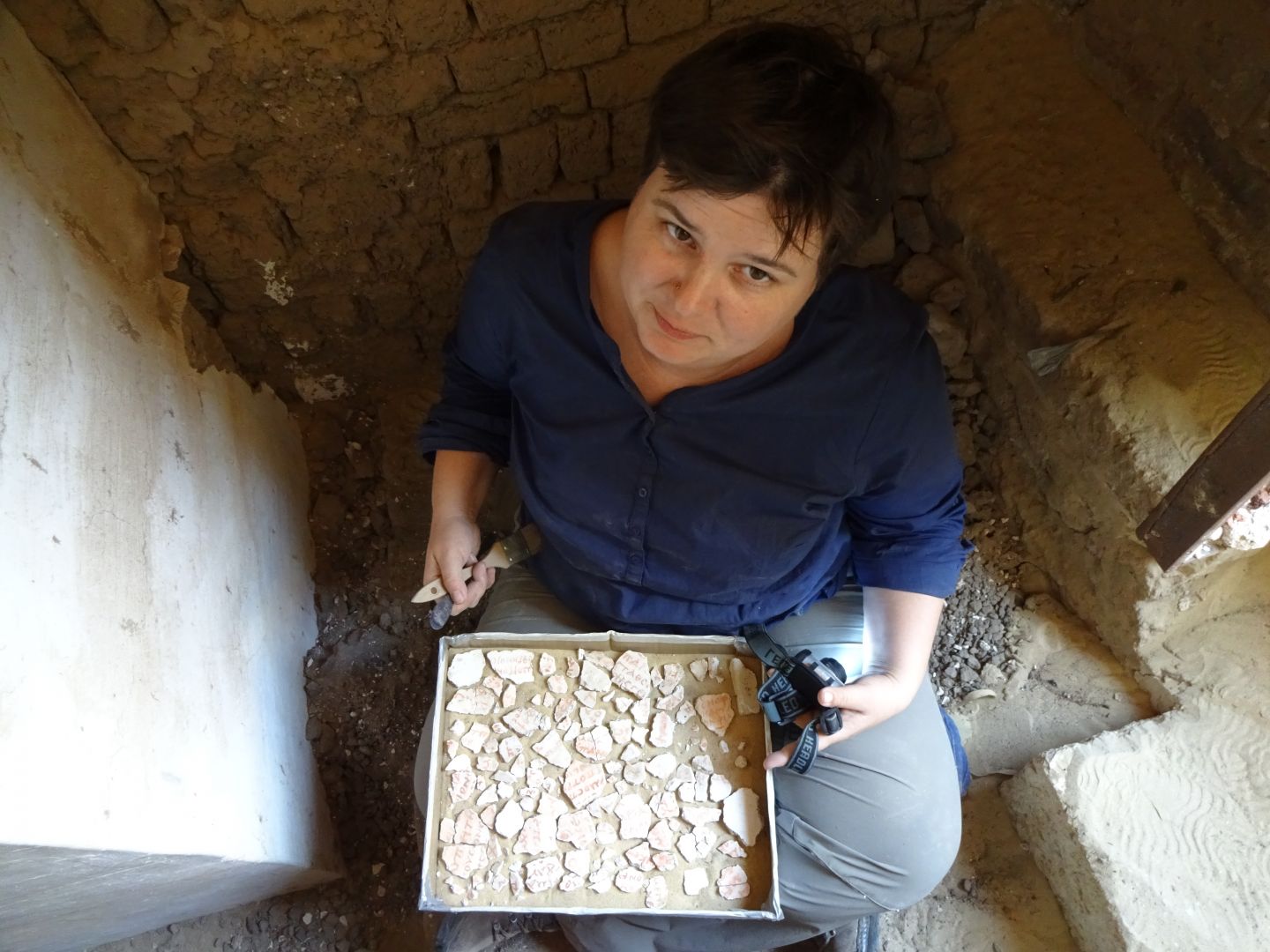 Furthermore, she worked in the area of the new tomb GB 72 to prevent the plaster from falling down.